How Did Japanese Longevity Go From Worst to First?

We have often heard that the Japanese are a very long-lived people—with several super-centenarians (age 110+) in recent memory being Japanese. In fact, Japan has consistently had the longest life expectancy of the major nations (averaging approximately 85 years of age overall, or about 88 years for women and 82 for men). The Japanese have also enjoyed a reputation for being an extremely healthy people who follow the best of lifestyle practices. However, it may surprise many readers of this blog to learn that this championship longevity was not always the case with the Japanese. The population of Japan is racially and ethnically essentially homogeneous, which makes it ideal to study trends in diseases over time, because there is very little genetic variation amongst the Japanese people.

Culturally, there is more than a grain of truth in stereotypes:  Many Japanese people drink green tea, which is healthy because of antioxidant compounds called polyphenols (if you’re interested in the specific polyphenols found in green tea, look up catechin and epigallocatechin gallate “EGCG”), which are good for cardiac health and may have antitumor properties. Japanese folks also don’t tend to eat a completely Westernized diet, even though they have adopted many Western foods. Neither obesity, nor the related type-2 diabetes, are endemic in Japan the way they are in the United States.  In Japan, many of the citizens practice mindful meditation, while one might say we in America practice something more like mindless aggravation. In Japan, they’re like, totally zen. Therefore, it should come as no surprise that their life expectancy is longer than their Western counterparts, both in the United States (approximately 79 years overall) and in Europe.

The traditional Japanese diet was high in fish (being a nation surrounded by water, which was generally prepared heavily salted and/or smoked, and historically had banned meat until the 19th century due to Buddhist religious influences. Meat and dairy consumption remained low throughout most of the first half of the 20th century.

As recently as the late 1960s, Japan had the shortest life expectancy among the G7 countries, due largely to high mortality from cerebrovascular disease (primarily stroke) and stomach cancer. Let us examine these more closely. 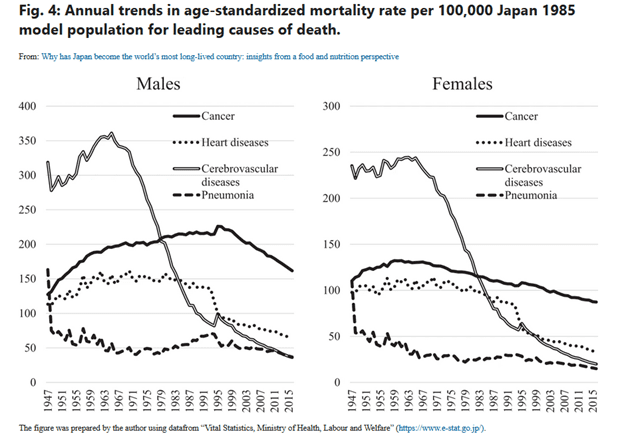 First of all, in 1970, a startling 80% of Japanese men smoked, and in 2013, only 30% of Japanese men lit up. Only 15% of Japanese women smoked in 1970, and this declined to 8% in 2013. While it is certainly true that smoking can contribute to stroke, as well as many forms of cancer, the high smoking rates were probably not the main reason for the difference in the rates of stroke and the rates of stomach cancer seen in 1970 and today (mortality from stroke has dropped dramatically, there is much less cancer mortality overall, and stomach cancer is no longer considered endemic in Japan).

Eating Some Meat and Dairy Reduced Strokes in Japan’s Population

Here, if you look at the chart above, you will see that in about 1971, cerebrovascular disease (stroke) peaked, then started dropping off sharply—in both sexes. As far as we know, nothing momentous happened in 1971 specifically. However, people in Japan had begun to eat more meat and dairy products—which contain saturated fatty acids and cholesterol—a much-needed part of the cell’s architecture that protects against strokes. Cardiologists have known for some time that cholesterol is not uniformly evil, and that in fact, if you reduce a patient’s cholesterol too much, they will be in danger of getting a stroke. Therefore, we saw that, by introducing a modest amount of meat and dairy products into the Japanese diet, rates of stroke were dramatically reduced over a 50-year period among the sample population.

It should also be noted that the Japanese do not have a yen for sugar-sweetened beverages like soda, which raise the risk of all types of cardiovascular disease, preferring to drink tea instead.

Control of Bacteria, Viruses, and Dietary Modifications Reduced the Rate of Certain Cancers Endemic to Japan

Stomach cancer used to be endemic to Japan.   As recently as the late ‘60s and early ‘70s, the case rates were extremely high. Epidemiologists finally recognized that one causative factor was the high amount of salted and/or smoked fish in the Japanese diet.  So, while fish is rich in omega-3 fatty acids, which are healthy for the heart, the methods of preparation employed in traditional Japanese cookery are decidedly unhealthy, as they use excessive amounts of salt, and then sometimes smoke the fish. This is known to be irritating and inflammatory to stomach tissue, and has been linked to stomach cancer. Also, the common Japanese practice of drinking extremely hot tea, often at temperatures of 140 degrees Fahrenheit or higher, has been linked not only to stomach cancer, but to esophageal cancer as well. Esophageal cancer, like stomach cancer, is found at higher-than-normal rates in Japanese and other Asian populations, and often carries a poor prognosis because, also like stomach cancer, it is typically not diagnosed until symptoms appear, which is unfortunately usually when it is in the metastatic setting.

However, cancer rates in general, as well as mortality rates from people who developed cancer, have decreased over the past 50 years in Japan. Stomach and esophageal cancer rates have decreased. Not only have people become aware of the reasons explained above, and cut down dramatically on their use of excessive salt when preparing fish dishes (after all, it raises blood pressure!), but diversified their diet to include other protein sources. Another major cause of stomach and esophageal cancer is the bacterium Helicobacter pylori, which causes ulcers. Many people became educated about this and got screened, and eradicated the infection with a simple course of antibiotic treatment. In a similar vein, liver cancer had previously been a major problem in Asian populations. A substantial proportion of liver cancers is caused by Hepatitis B virus, which can be vaccinated against. Once enough of the population underwent vaccination, liver cancer rates also decreased.

Conclusion: From Worst to First

In summary, in a relatively short time, by using public health measures to inform and educate the population, Japan was able to use lifestyle modifications to go from worst to first in overall longevity among the G7 nations: an impressive achievement.

When Your Heart’s in Quarantine, What Does Anything Else Really Mean?

The DIRECT as well as the INDIRECT effects of COVID-19 on the heart, and how to make sure the beat goes on.

Coffee and My Heart

More research is needed in order to determine the exact effects of regular coffee consumption on cholesterol and lipid levels, as well as on long-term health and its role in preventing or causing diseases.

Myth or Fact: Can a "Broken Heart" kill me?

Is it true that you can have a heart attack or stroke from a broken heart? Although rare, it can happen.